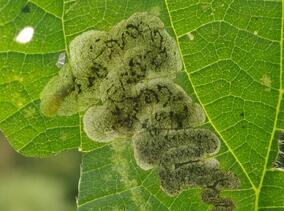 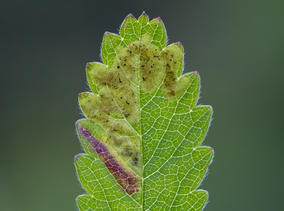 HEAD.
There are normally between three and six orbital bristles divided into two groups. The upper orbital bristles (ors) are generally inclined upwards or slightly outwards; the lower orbital bristles (ori) may be inclined partly upwards but also frequently inwards. The strength and number of these bristles has great taxonomic significance, although there can be slight variation within species. There are usually two upper orbital bristles, which may be equal in length, or the upper one is frequently shorter or sometimes entirely lacking. In general the relative strength of the ors is of greater taxonomic value than that of the ori. The minute hairs immediately adjoining the eye margin referred to as orbital setulae are important generically and can also be used to separate closely related species. The direction of inclination, the strength and the number of rows present are all valuable characters. The shape of the lunule is of particular significance in separating the subgenera of the genus Cerodontha. The eye in the Agromyzidae is generally bare, but may be significantly pilose as in Cerodontha (Icteromyza) bohemanni (Ryden) and Chromatomyia nigra Meigen. The general configuration of the head can be of considerable importance. In most species the orbits are not greatly differentiated but in certain cases such as Cerodontha (Po.) muscina (Mg.) they may be greatly enlarged laterally or in others significantly raised above the plane of the frons, as in Phytomyza flavicornis Fall. The width of jowl in relation to the eye can show some slight variation, but where the jowls are unusually narrow or unusually broad this can be a valuable character. The facial keel is normally not pronounced, but may be conspicuously developed and of generic significance as in Ophiomyia, where the raised keel entirely divides the base of the antennae. In the same genus the vibrissa in the male is normally, although not invariably, replaced by a bunch of bristles which are fused to form a vibrissal fasciculus. The shape and pilosity of the third antennal segment is of considerable significance. While the normal form is round or slightly longer than broad with slight but not pronounced pilosity, in certain cases the third antennal segment may be elongated or may have conspicuously long pubescence as in Liriomyza ptarmicae or Phytoliriomyza scotica. The colour of the various parts of the head is of the utmost significance. The colour of the frons and the antennae is obviously important. It may be yellowish white, yellowish orange, brown, or entirely black. In black species the antennae are invariably black, while in yellowish species the third antennal segment may be yellow, slightly darkened, or entirely black. The orbits may be differentiated from the frons by distinctive black, grey or yellow coloration.

MESONOTUM.
The chaetotaxy of the mesonotum is of great significance. In the grass-feeding Agromyza species there are a number of dorso-centrals (dc) greatly reducing in size, and frequently with no pre-sutural dc On the other hand in the spiraeae-group feeding on Rosaceae, there are always 3+1 dc, with the pre-sutural one strong and well developed. There is some degree of variation in the number of acrostichals (acr), but in most species these are quite clearly either in two rows or in four or maybe in six or more rows. In a few cases such as Phytomyza plantaginis and Chromatomyia syngenesiae, acr are entirely lacking. The colour of the mesonotum can be a valuable character. It can be partially yellow in some Agromyza, Liriomyza and Phytomyza species but is generally grey or more rarely brownish or brilliantly shining black. In a few Melanagromyza species it may be greenish or bluish.

LEGS.
These provide a few good taxonomic characters, mainly colour of the coxae, femora or tibiae. The presence of a lateral bristle on the foretibiae is useful for distinguishing Nemorimyza posticata. The presence of one, two or sometimes more strong bristles on the mid-tibiae is somewhat variable, but can nevertheless be of specific significance.

WING.
The wing length is invariably a valuable character. Important venational characters are the presence or absence of the second cross-vein and its position, either towards the wing base or well beyond the termination of vein R1; and also the relative length of the last and penultimate sections of vein M3+4. The extension of the costa to the apex of vein M1+2 or its reduction to the apex of R4+5 is significant, and also in many species the costal ratio. The colour of the halteres is a useful generic character with British species. However, in the genus Amauromyza there are subgenera both with black and with white halteres. The colour of the squamal fringe is frequently a character of importance; it ranges from silvery white to jet black and shows remarkably little variation.

ABDOMEN.
The colour of the abdomen is constant in many species, for instance entirely black in most Agromyza, or greenish as in many Melanagromyza species or largely yellow in most Liriomyza. In certain species, particularly in the genus Phytomyza, the hind margins of the tergites may be partially yellow, but the degree to which this pale colour is present can vary considerably and this character must be used with caution.